A couple of years ago I was using some PMEG3050EP Schottky diodes for a power supply project. Given their specs (5A forward current at 0.36V maximum voltage drop), I decided to order a couple more for my stash once the project was completed. The shipment arrived, but with no concrete project in mind, the diodes went into my stock with no further inspection (they looked like diodes after all). A bad mistake, as I would learn more than three years later.

Planning for another project, I wanted to build a quick prototype using the PMEG3050EP, only to find that I had just two diodes left from my original order as well as fifty that looked different and had the wrong case marking (‘B88’ instead of ‘A7’), too. So what kind of device did the foreign seller (whose shop has long been closed) actually send me?

On the positive side, it’s a two-terminal device, so it could be a diode. The fact that there’s a cathode marking bar (two parallel lines, actually) on one side of the case supports this assumption. From a side-by-side comparison with an actual PMEG3050EP, a size different is quite noticeable, though. The unknown diode is measuring just 1.8 by 2.6mm, which means it’s in SOD-123FL case. In contrast to this, the PMEG3050EP is supposed to come in a SOD128 case. This will likely make a difference with regard to the diode’s maximum power dissipation rating and its maximum forward current. But how do its characteristics compare to the PMEG3050EP? Let’s find out. 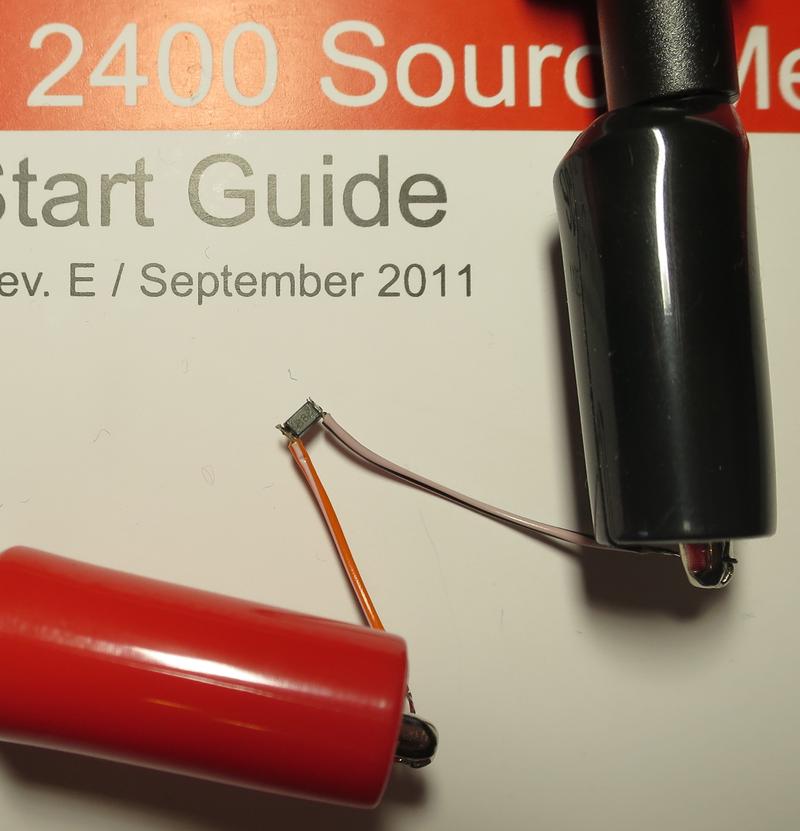 I was able to borrow a Keithley 2400 series meter, which can sweep a certain voltage (or current) range, and report the corresponding current through (or voltage across) a device-under-test. After soldering some extension leads to the diode, I used the meter to sweep through the typical input voltage range (0-1V) and measure the diodes' corresponding forward currents. I used a 5mV increment between steps and stopped the experiments once the forward current exceeded 1A. The forward currents vs. forward voltages for both the original PMEG3050EP (label ‘A7’) as well as the unknown device (label ‘B88’) are shown as follows.

So what can we tell from this diagram? Well, on the positive side, its curve is characteristic for a diode. Phew. And it has an even lower forward voltage than the PMEG3050EP. For the B88 device, it’s 0.25V@10mA, for the A7 diode it’s around 0.27V@10mA. How I could tell this? Well, things get much simpler if you have a look at the same plot with a logarithmic y-axis.

By connecting the diode in reverse, I did also measure the breakdown voltage (up to a maximum of 20mA due to the hardware limitations of the Keithley meter). Both diodes' breakdown voltages happen to be quite similar (and significantly higher than the 30V stated in the PMEG3050EP data sheet). The B88 started conducting at -50V across its terminals, and my sample of the PMEG3050EP diode could even stand -53V before breakdown.

So what’s the take-home message? On the positive side, the SOD-123FL devices in my stash are Schottky diodes with a low forward voltage drop. On the negative side of things, there’s no SOD-123FL diodes that can take more than 2 amps of forward current, so I won’t be able to use them for high-current designs. I guess I’ll keep them for prototyping purposes.