By chance, I stumbled across TFG - The Secret of Monkey Island RECODED recently, a fan game by Daniele Spadoni that relies on the Monkey Island scenery but gives it an entirely new twist. Downloads for binaries (Windows-only, unfortunately) are available from his DeviantArt page spadoni-production. Even though I must admit that at first I thought this was a poorly-executed clone of the original game, Daniele Spadoni’s fan game got me hooked for two days straight!

Having taken the occasional glance into walkthrough books when playing the original ‘The Secret of Monkey Island’ (the Internet wasn’t much of a thing back in the day), it’s time to give back to the community now. So here’s the toeeks.eu way of completing the game (if you feel like copying these hints to another webpage, be fair and give credit where credit is due). 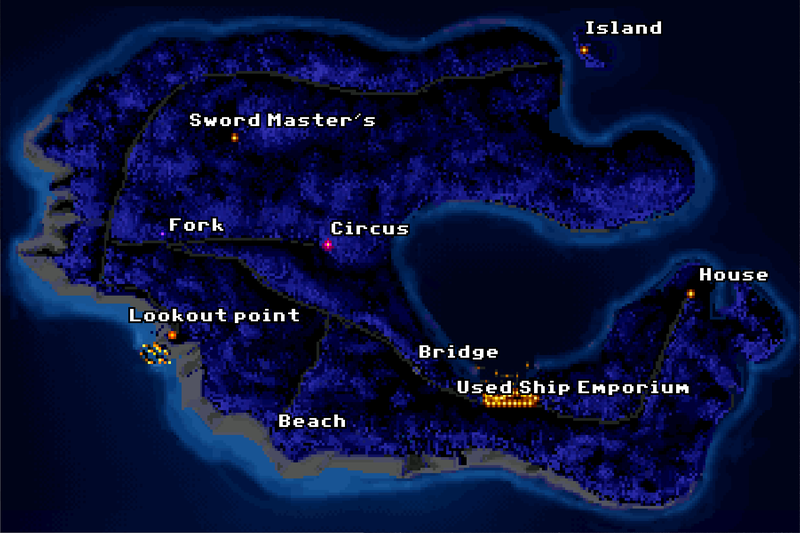 Walk down the path to leave the beach. Walk to the “Circus” on the map. Look at the carriage to get some gun powder.

Return to the map, go to the “Fork”. Use the gun powder on the ravine. Walk across the (now visible) bridge. Climb down the tree stump. Continue the path all the way to the bell tent. In the tent, pick up the spell book.

Return to Mêlée Island along the same path and walk to the “Lookout point” on the map.

Part One - The Three Trials

Walk along the pier, past the Scumm Bar, through the archway, until you reach the big clock. Enter the door on the right. Talk to the Voodoo Lady, in order to convert the spell book into a flute (a list of spells is given below). Pick up the chalice.

Return through the sea. Climb the ladder. Go left to the “Lookout point”. Talk to Lookout, in order to be allowed to use his cauldron. Use your pot to retrieve the boiling fat from the cauldron.

Go to the “Bridge” on the map. Give the red herring to the troll.

Go to Stan’s “Used Ship Emporium” on the map. Hit the grog machine. Pick up the grog bottle.

Via the “Lookout point” on the map, walk down the stairs to the pier. Climb down the ladder. Pick up the mega tools. Rip out the aquatic plants to find the treasure of Mêlée Island (challenge 1/3).

Leave the Scumm Bar and walk all the way through town to the governor’s mansion. Use the flute to tame the poodles. Enter the mansion. Pick up the vase. Apply hot fat to the floor. Once Fester Shinetop has slipped, collect his keys from the floor. Use the gold key in the door next to the building entrance. Walk to the left. Open the drawer of the desk with the ink, in order to find the gopher repellent and the staple remover. Use the staple remover on the yak. Talk to the stars, in order to receive the upgraded flute spell. Enter the room with the yak once again. Pick up the wax lips. Use the feather with the ink. Use the file on the lock securing the idol (challenge 2/3). Leave the room.

You’ll find yourself in jail now. Use the bronze key to open the lock. Use the flute on the fine letter, in order to convert it into a love letter. Use the inked feather on the love letter.

Leave the shop and walk to the big clock. Give the love letter to the pirate journalist. Use the silver key to enter the rubber pulley shoppe on the left, in order to get the rubber duck and a banana.

Visit the house of the “Swordmaster” on the map (challenge 3/3).

Return to the pier via the “Lookout point”, to see LeChuck sailing away.

Walk to the “Circus” on the map. Enter the circus tent, in order to learn that it’s “couples night”. Pay another visit to the Voodoo Lady and ask her to come along to the circus. Walk back to the circus and enter the tent. Use the flute on the straw, in order to get plenty of gold.

Go to Stan’s “Used Ship Emporium”, in order to buy all of his ships.

Walk back into town, and into the upper alley next to the shop. Open the elevator door. Use the mega tools on the lever. Walk out of the alley.

Enter the church. Walk to the altar. Use the chalice with the fountain. Exit the church.

Pay a visit to the Voodoo Lady. Use the flute with the sphere (located on top of the skull).

Return to the Voodoo Lady. Pick up the voodoo knickknacks from the shelves.

Go to the pier. Climb down the ladder. Pick up the starfish. Walk to the kitchen. Fill the chalice with grog from the barrel. Return to the pier. Use the magic sheet with the Sea Monkey.

Back on-board the Sea Monkey, go down the hatch. Walk through the door to the kitchen. Add the following ingredients to the pot:

After the journey has completed, walk onto the deck. Use the magic sheet with Monkey Island.

Walk into the jungle. Go to the “Fort” on the northern rim of the volcanic crater. Talk to Herman Toothrot.

Walk to the “Pond”. Use the light sword on the rope. Use the flute on the broken oars. Pick up the oars.

Row back to the southern part of the island. Walk to the “Fort”. Give the fish to Herman Toothrot. Take the banana picker.

Walk to the “Beach”. Use the banana picker to collect the luscious, juicy bananas from the tree.

Row to the northern part of the island. Walk to the “River”. Give the three-headed monkey a banana.

Row to the south part of the island. Walk to the “View”. Give the three-headed monkey another banana.

(optional) Walk all the way to the right to enjoy the “rubber tree” easter egg.

Go to the “Beach”. Row to the northern part of the island. In the village, walk left into the big stone head.

The following flute spells are available, and have to be used with the following objects:

Once the staple remover has been used on the yak, the following additional spell becomes available:

A word of caution

Like in the original game, do not stay under water for more than 10 minutes.

Also, don’t accidentally type any of the control key sequences used by the game engine. These include Ctrl-A (show accessible tracks), Ctrl-S (add all items to the inventory), Ctrl-D (list objects and characters in the current room), Ctrl-X (move to another room), and Ctrl-V (show Adventure Game Studio run-time engine version).