Out of curiosity, I wanted to find out if it was possible to capture the readings of the on-board temperature sensors on an older desktop PC. Scanning the ICs on the board for one that could execute the required analog-to-digital conversion, I came across the ALi M5879 “System Hardware Monitor”, which can capture up to 2 thermistor inputs, 4 voltage channels, and 2 fan speeds. There’s no full datasheet available online (at least none I could find), yet the product brief luckily features the pinout diagram, according to which the device communicates via I2C (which is technically compatible to the SMBus found on virtually all computer mainboards). 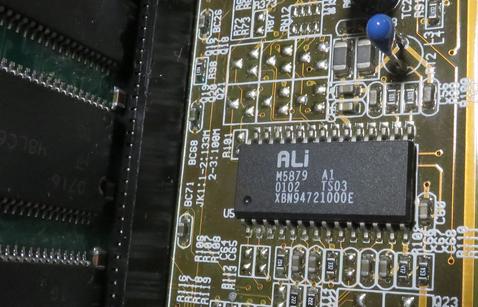 So would it really be as simple as capturing some bus traffic in order to find out the temperatures, and maybe even other sensor readings?

What’s happening on the I2C/SMBus?

After hooking up the scope to the SDA and SCL pins, a periodic pattern of I2C traffic can be observed during regular system operation.

By decoding the I2C traffic on a scope, the typical style of the transactions becomes clear: In the below diagram, a bus master prompts the device at slave address 0x2C for a sample of its 0x20 sensor channel. Then, a read operation to the same slave address follows, as a payload of which the slave transmits the corresponding sensor’s value.

Using a microcontroller to sniff the on-board SMBus, make sense of the data, and display it to the user shouldn’t be too complicated, right?

While I could locate at least three devices on the SMBus (a bus master, the M5879, and the real-time clock), it turned out to be rather difficult to find a suitable location from which the signals could be conveniently tapped. The bus is pulled up by a pair of 4k7 resistors, yet these are tucked away in-between two PCI slots and not easily accessible. The SMBus traces themselves are meandering across the board, but there are no openly exposed pads or connectors, and I didn’t feel like abusing one of the (rather tiny) vias for this purpose. This only left the slave devices as candidates from which the SMBus signal could be tapped.

Luckily, the M5879 comes in a 28-SOP package, with plenty of pin spacing to simply attach the connections (using enameled wire, in my case) there. As a further benefit, the device has VDD and (digital) GND connections readily available. This made it possible to buffer the signal using a 74HC14 (hex inverter with Schmitt-trigger inputs) on some SMD protoboard. This way, there’s no additional load on the bus and, more importantly, any (unintentional) write operations by the microcontroller are shielded from making it through to the bus. 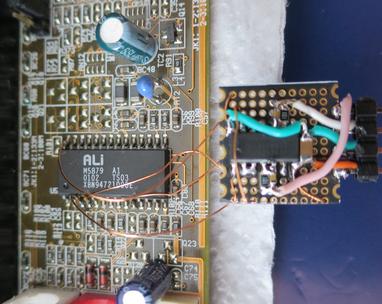 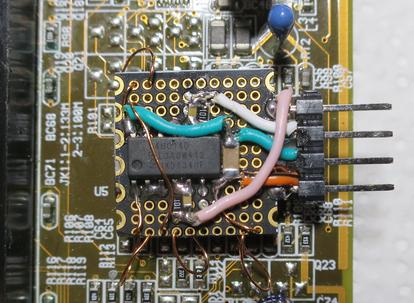 The signals on the pin header on the right are SDA, SCL, VCC (to power the microcontroller), and GND. A small piece of double-sided tape was used to mount the buffer right on top of the M5879, with the pins conveniently available at the edge of the mainboard. So all that was left was getting the software right.

Capturing the signals using a microcontroller

On the way to successfully logging the SMBus traffic, there were a couple of dead-ends:

The only thing that turned out to be working was to continuously capture the signals on the SMBus pins, wait for the starting condition (SMBDAT undergoing a high-to-low transition while SMBCLK is high), writing them to a buffer, and parsing them once the buffer is full (or a timeout occurred). This was inspired by the i2c-sniffer-100kBaud-Arduino-Mega by Github user rricharz. Note that for this to work, both SMBDAT/SDA and SMBCLK/SCL must be connected to the same microcontroller port (port D in below code), such that their values can be captured using a single port read command.

The relevant snippet of Arduino-compatible code for the Teensy 2.0 is provided as follows.

The conversion functions in the switch(type) part of the loop() were determined empirically by monitoring the output of the BIOS screen during system startup and correlating fluctuating values with the corresponding SMBus traffic. They might be part of an initialization sequence (which I did not capture) and are likely different for other system hardware monitors.